The Pat Flowers SOUNDIES, while on the surface just another series produced by William Forest Crouch and Filmcraft in the post war period, has long challenged my “comfort level” where SOUNDIES production is concerned.

As I continue research on Panoram SOUNDIES I often find myself reassessing sessions that I had long thought I understood. Such is the case with the three SOUNDIES featuring pianist Pat Flowers. Additional research, and new information, has resulted in new questions, and ultimately the “rewriting” of the session description for this important trio of films. It somehow seems appropriate that the study of these early music videos ends with uncertainty and a number of unresolved issues!

It is certainly a point of considerable interest, if not one that is central to this discussion, that one of the SOUNDIES in the Pat Flowers series, “Coalmine Boogie,” is the last SOUNDIE to be released …. that is, the last film in the last weekly release of these musical shorts.

The impetus for this article is Howard Rye’s discussion of Mabel Lee (Names and Numbers #37), and my subsequent promise to revisit and fill in some of the details of Mabel Lee’s filmography. Howard’s biographical sketch of Lee is included in N&N #37, and I have borrowed liberally from his research where the following description of Pat Flowers’s career is concerned.

Pat Flowers
Born in Detroit in 1919, Pat Flowers moved to New York City in 1939 where he soon became immersed in the jazz scene. Flowers is best known as a protégé of Fats Waller, whose piano and vocal style obviously influenced him greatly. Flowers did in fact learn first hand from Waller, and he performed in the lobby of the Yacht Club at a time when Waller was in residence at the club. After gaining a reputation in New York City, Flowers performed at the Swing Club on 52nd Street, and served as relief pianist at the Famous Door, although I do not know exactly when these particular engagements took place. Flowers is noted as being in residence at the Cafe Society in May 1946.

Flowers returned to Detroit in 1942 and 1943, but was back in New York City in 1943. He was signed by Waller’s longtime manager, Ed Kirkeby, after Waller’s untimely death in December 1943. Flowers worked under Kirkeby’s direction during this period and his Victor recordings all display the influence of his musical mentor, and indeed feature many musicians who had recorded with Waller.

Pat Flowers recorded prolifically, beginning with a date for Decca Records in June 1941. Flowers recorded a session for Hit/Guild in May 1944, and can be heard on a large number of airchecks from this period. July 1946 finds Flowers under contract to R.C.A. Victor, and recording almost twenty sides over a period of 16 months. As noted above, many of these recordings feature ex-Waller sidemen. Flowers was “rediscovered” in the early 1970’s, and recorded two albums for the French Black and Blue label. Despite his strong association with the music of Fats Waller, Pat Flowers was a fine stride pianist in his own right, as can be heard on his recordings and in at least two of his SOUNDIES appearances.

All of the Pat Flowers SOUNDIES were produced in New York City and bear the same production credits:
Filmcraft Productions
William Forest Crouch, producer and director

Filmcraft Productions, and Crouch in particular, were the most prolific of SOUNDIES producers, and are actually important enough to be dealt with in a separate article!

Although there is no such suggestion in the production files, one would not be surprised to learn that the titles recorded by Flowers, two “traditional folk songs” and possibly a generic boogie woogie, were indeed suggested or selected by SOUNDIE producer / director William Forest Crouch. The two folk songs were in the public domain, and the boogie woogie composition was an unpublished original. As a result, these three songs could be used royalty-free, an important consideration where “song selection” was concerned. The material aside, however, Flowers sings and swings mightily, proving himself a worthy heir to Waller’s style.

The Pat Flowers SOUNDIES, while on the surface just another series produced by William Forest Crouch and Filmcraft in the post war period, has long challenged my “comfort level” where SOUNDIES production is concerned. First, it might be expected (although there are many exceptions) that Crouch would have created a set of two or four soundies featuring Flowers; three SOUNDIES in a series is slightly unusual. Second, why were the talents of Mabel Lee, one of Crouch’s featured dancers, used in only one SOUNDIE? If she were in the studio for a sideline call, why use her only once? And last, why is Flowers, the performer given main credit, only on screen briefly on “Coalmine Boogie,” with Mabel Lee and the dancers featured for the rest of the film? While one can suggest that this is “just the way the session worked out,” which is certainly reasonable given the history and pattern of SOUNDIES production, there is another explanation, as suggested by new research, which is detailed below.

Dixie Rhythm and Scotch Boogie
The first two titles were recorded the week commencing December 4, 1944. It is possible, however, that this recording date was canceled, or that there were problems with the quality or content of the soundtracks, and that the session was rescheduled for the week commencing January 22, 1945. Although there are no such suggestions in the production files, Crouch often used the facilities of R.C.A. Victor for his recording sessions. It should

Coalmine Boogie
In all likelihood, this SOUNDIE was assembled in late 1946, as explained below under the discussion of sideline photography. In any case, the production files call for only two recordings by Pat Flowers in December 1944. And while this track might have been added to that session and not noted in the files, or recorded at a January 1945 session, it is unlikely that Flowers returned to the recording studio in late 1946 to record one boogie-woogie title.

The actual identity of the soundtrack pianist has indeed worried other researchers. Howard Rye, for example, suggests, “…. it is evident that this Flowers SOUNDIE is not in his usual style. There is always the possibility of course that this is accounted for merely by the nature of the material. [However], after comparing ‘Coalmine Boogie’ and ‘Scotch Boogie’ I cannot hear any reason to suppose they are by different pianists. Although this is not Pat’s usual style, he did record boogie for Guild. Though I have entertained the idea myself in the past, I don’t think there’s any real mandate for supposing Pat not to have been capable of this work.”

The evidence here is therefore quite inconclusive! While it might be Flowers on soundtrack, in a recording that was two years old by this time, this could also be “canned music” purchased from an outside source (The Sam Fox Publishing Company, for example), or might also be an earlier SOUNDIE soundtrack recording, musician unknown, pulled from the vaults and used at the time this SOUNDIE was assembled

In summary, the recording date for the third title cannot currently be determined, nor can we state with any certainty that the soundtrack pianist is actually Pat Flowers.

Two young ladies can be seen in the first SOUNDIE. A third sideline extra, who is not one of the two women seen in the first film, is seen in the second SOUNDIE. Note that this woman has been identified in the past as Mabel Lee, but this is not the case, and we must now substitute “unknown” in Lee’s place.

Coalmine Boogie
The date for sideline photography for this SOUNDIE is unknown and, as explained below, the sideline production is not part of the actual session that produced the first two SOUNDIES in this series. In fact, the brief segment that features Flowers at the beginning of “Coalmine Boogie” is duplicated footage from “Dixie Rhythm”; that is, no original footage of Flowers can be seen in this film!

One of the problems that I encountered with this SOUNDIE is that, as the entire SOUNDIES enterprise wound down in late 1946 – early 1947, far fewer prints were struck of each film. It therefore took me many years to locate a print of “Coalmine Boogie.” When I finally located a print, it was not an original Panoram print, but rather a copy of the SOUNDIE that had been used as the opening sequence in a SOUNDIES compilation feature released ca. July 1947 called “Ebony Parade.”

“Ebony Parade” included SOUNDIES performances by such notable black performers, including Count Basie, Cab Calloway, Una May Carlisle and many others. But luckily, “Coalmine Boogie” opens the film, providing us with a partial solution to the problem at hand. Feature host Mantan Moreland is seen in a swami outfit, reading Ebony Magazine in front of his crystal ball. He comments upon Mabel Lee’s appearance on the cover of the magazine, glances into the crystal and begins chanting her name, at which point she appears. When asked what she is going to share on screen, Mabel replies, “Coalmine Boogie,” and the SOUNDIE begins. We first see Pat Flowers on screen, in the footage pulled from “Dixie Rhythm,” and then Mabel Lee appears, along with the Ebonettes / Ebonettes. The fact that Mabel is dressed in the same outfit in both the opening sequence with Moreland and in the SOUNDIE, and is at no time on screen with Flowers, suggests that this SOUNDIE was produced in late 1946, as opposed to 1944, and was intended to be used as both a SOUNDIE, and as a segment in the SOUNDIE feature compilation. (This production date is supported by an initial copyright registration on December 30, 1946.)

The Ebonettes, a group of five lighted-skinned black dancers, has been recently identified as the chorus line (or part thereof) from the Cafe Zanzibar, which was billed at the club as the Zanzibeauts.

In summary, in the production of “Coalmine Boogie” Crouch used a soundtrack recording of unknown origin, and matched it with visual elements lifted from “Dixie Rhythm,” along with new dance footage apparently intended for use in both the SOUNDIE release and the SOUNDIE feature compilation “Ebony Parade.”

The two verified Pat Flowers’ SOUNDIES are welcome elements in the SOUNDIES catalogue, and allow us to see and hear this fine Waller-influenced performer in his only screen appearances. Since there are no dancers in the two films, we are allowed to focus on Flowers as he sings and plays in the style that made him a popular pianist during this period. The songs performed in the films (Oh Susannah and Loch Lomand) may not be selections of choice, but Flowers nevertheless does a fine job with the material given him.

There are many unanswered questions about “Coalmine Boogie,” most of which are associated with the production of the SOUNDIE and its connection with “Ebony Parade.” The biggest question, however, concerns the boogie woogie soundtrack pianist. His performance reflects talent, inventiveness and understanding of the traditions of this music. It is quite likely that the musician is someone with whom we are familiar. Pat Flowers? Possibly so, but I suspect not. This is certainly a film requiring further investigation, and I would appreciate hearing from anyone whose musical focus is Pat Flowers or boogie woogie music from the 1940s. I can be contacted by clicking here. Any further discoveries will be shared with the group! 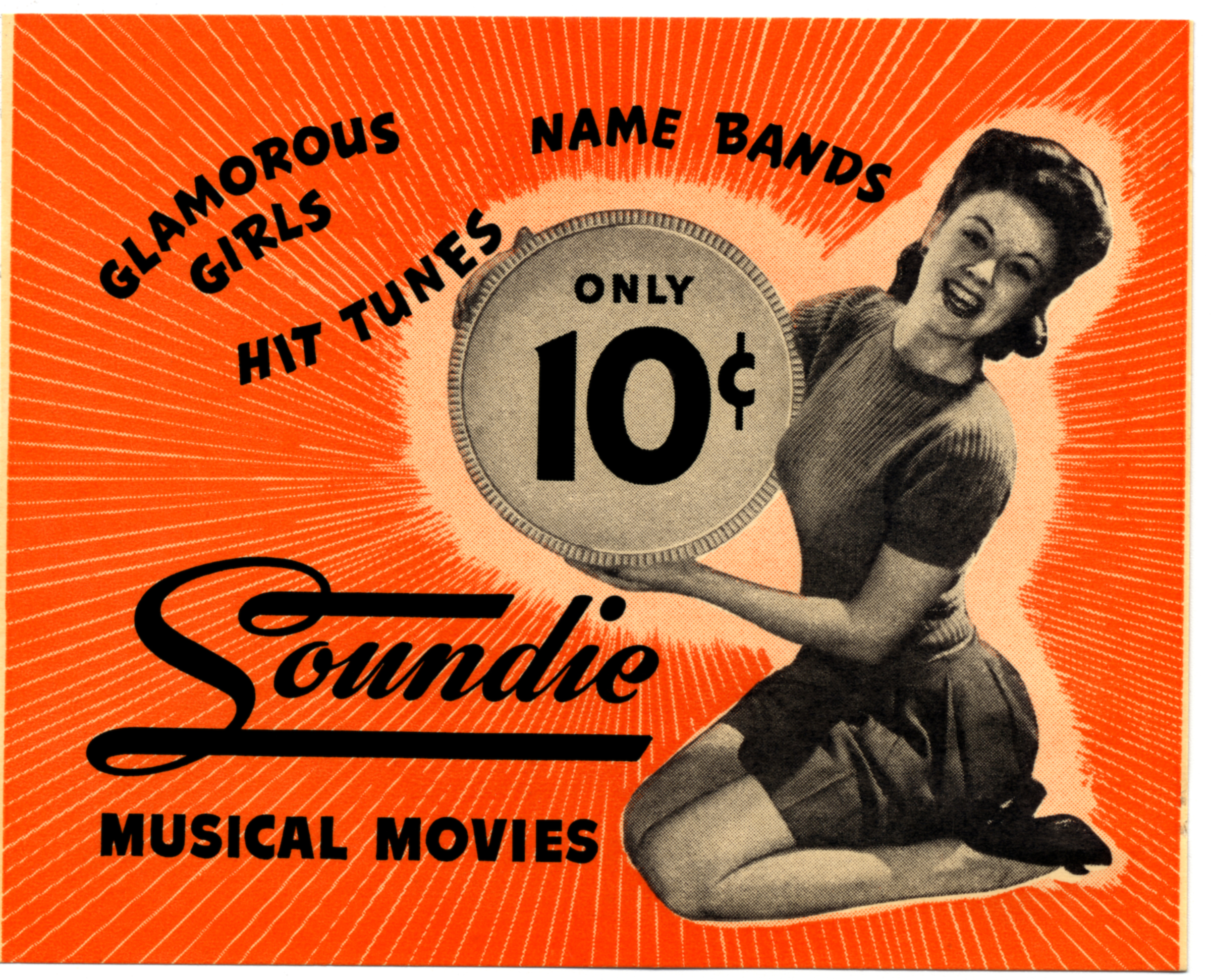 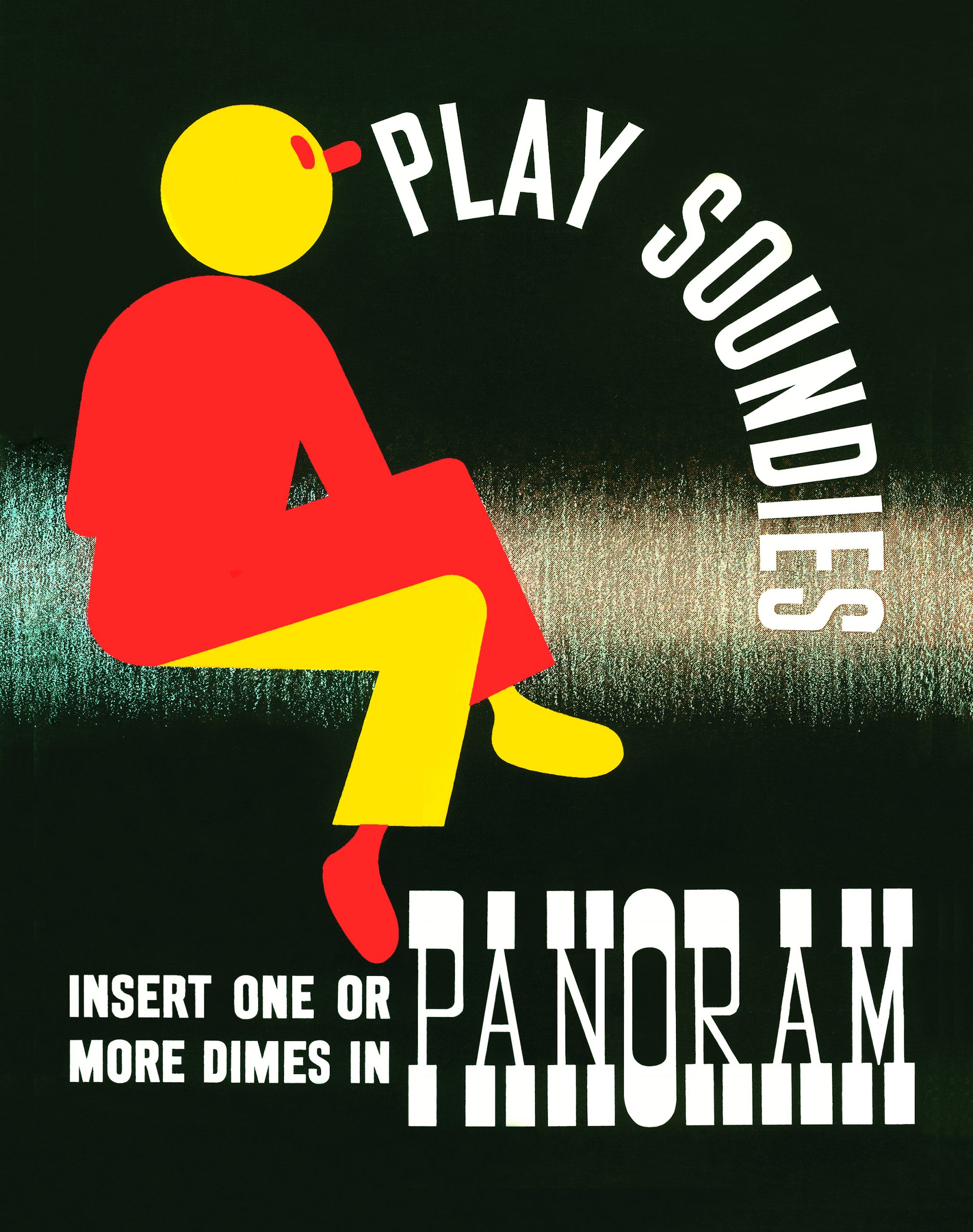 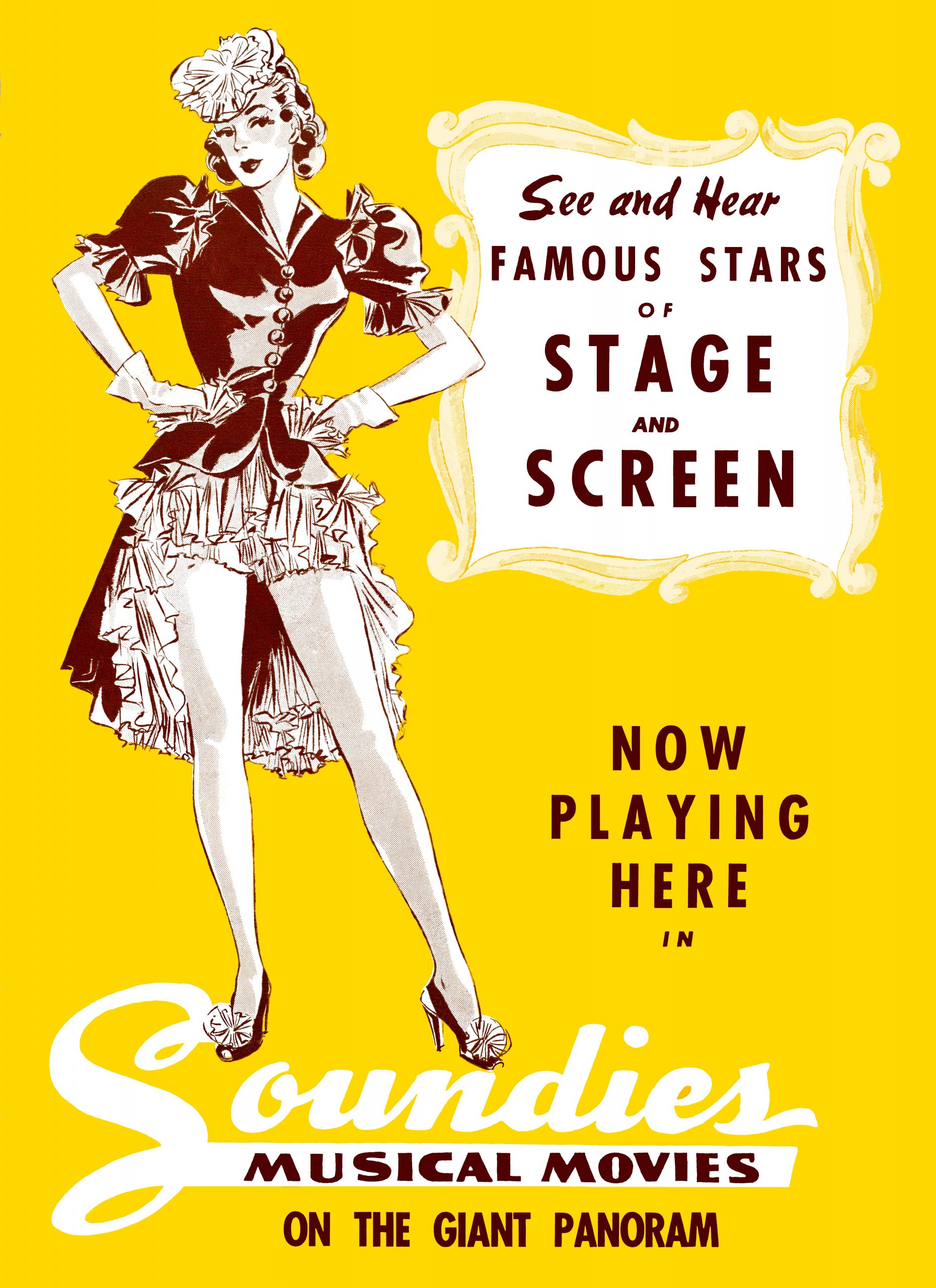