Disc Jockey All Stars “At the Jazz Band Ball”

Disc Jockey was a “B” feature film produced by Monogram Pictures in 1951, and released by its wholly-owned subsidiary, Allied Artists. Although Allied Artists had originally been formed in the 1940s to produce and distribute higher quality films, by 1951 it was also releasing “B” features such as Disc Jockey, along with such standard bill-of-faire as the Bowery Boys and Bomba The Jungle Boy series.

Disc Jockey was produced at Monogram Studios in Hollywood, with the musical sequences recorded and filmed between April 27 and My 9, 1951. The story revolves around the attempt of a promoter/ disc jockey to make a big hit of Ginny Simms, this to prove the power of disc jockeys in the face of the perceived threat from early television. The minimal story line provides a frame in which many performers are seen and heard on screen, among them Nick Lucas, Tommy Dorsey, Russ Morgan, Sarah Vaughan, George Shearing Quintet, Herb Jeffries, and the Riders of the Purple Sage.

Many nationally-known disc jockeys are seen on screen, including Martin Block, Joe Adams, Fred Robbins and Ed MacKenzie (Jack the Bellboy). Gene Norman is called into the fray to introduce a group of jazzmen who jam, if only briefly, on one of the secondary theme from “At the Jazz Band Ball.” The group is indeed stellar, and although the septet members are stylistically diverse, the short jam session works well. On screen we see and hear the following: Red Nichols, trumpet; Russ Morgan, trombone; Vido Musso, tenor sax; Jack Fina, piano; Joe Venuti, violin; Red Norvo, vibes and Ben Pollack drums. 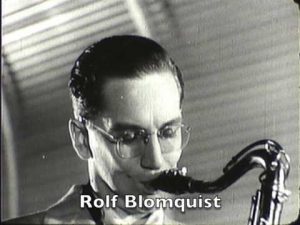 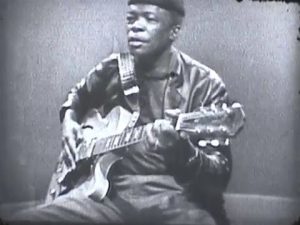 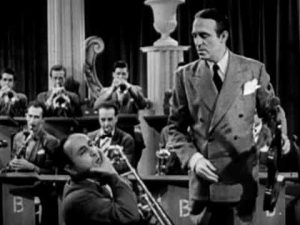