Milt Britton and his Band “Poet and Peasant”

A few years ago I shared this 1946 SOUNDIE in a clip presentation. The group, Milt Britton and his Band, is a comedy aggregation that had been performing since the early 1930s, and this routine was the regular conclusion to their stage shows. The clip had been including in the program not because of its entertainment value, although it is indeed a lot of fun to watch, but rather because the drummer on the band was the great Tiny Kahn; just to see him on screen (his only film appearance) was special for his audience. After the program a young fan who had interests in all genres of music commented on how The Who must have seen this film, so similar were the styles. While I rather doubt any connection between this band and the The Who, one can easily see what the young gentleman was thinking.

Playing in a comedy band was a demanding task because one’s musicianship had to be maintained throughout the performance. And those who played in this band were professionals, indeed. Critic George Simon notes that, along with their comic numbers, the Milt Britton band played fine music on stage, and occasionally for dancers. This particular number, Von Suppe’s Poet and Peasant, was used to close the act. It had been a part of the band’s “book” since the early 1930s, perhaps earlier. There is no jazz to be heard here, although in addition to Tiny Kahn, we have identified Norman Faye to the left in the trumpet section, and perhaps Aaron Sachs to the far right in the reeds. 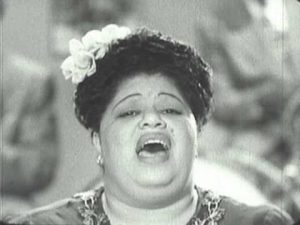 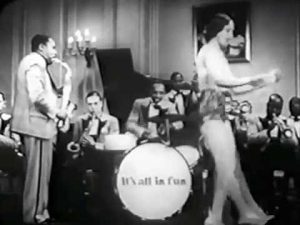 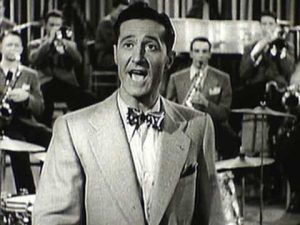