During the 1920s there were relative few jazz artists who specialized on the bass saxophone, and none were Adrian Rollini’s equal in terms of inventiveness, fluid technique and swing. Rollini can be found on hundreds of recordings, beginning with the California Ramblers in 1922. He also recorded with the Goofus Five, a small group drawn from the Rambler personnel, although here he often worked on a penny whistle-type instrument called the hot fountain pen. Rollini recorded with the likes of Bix Beiderbecke, Benny Goodman, Jack Teagarden, Jimmy Dorsey and others, and few of his waxings disappoint. At the same time Rollini also took up the vibraphone, becoming proficient on an instrument that is as different as possible from the bass sax.

Sometime in 1938 Adrian Rollini gave up the bass sax completely. Vince Giordano suggests that breathing problems due to asthma might have been the culprit. From that time on Rollini specialized on vibes and chimes. Between late 1937 and 1939 Rollini was associated with Richard Himber, and he appears in at least three shorts with the dance band leader. Most of Rollini’s work, however, was with a trio, and in this short subject we see him with his working trio that included Frank Victor on guitar and Harry Clark on string bass.

“Limehouse Blues,” a tune with a wonderful melody and changes, and regrettable lyrics (fortunately not presented in this version), allows Rollini to work out on both vibes and tubular bells. We also have a split chorus from guitarist Frank Victor and string bass Harry Clark. 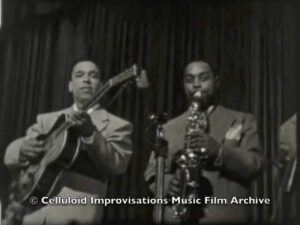 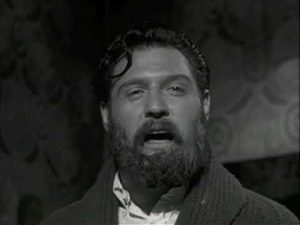